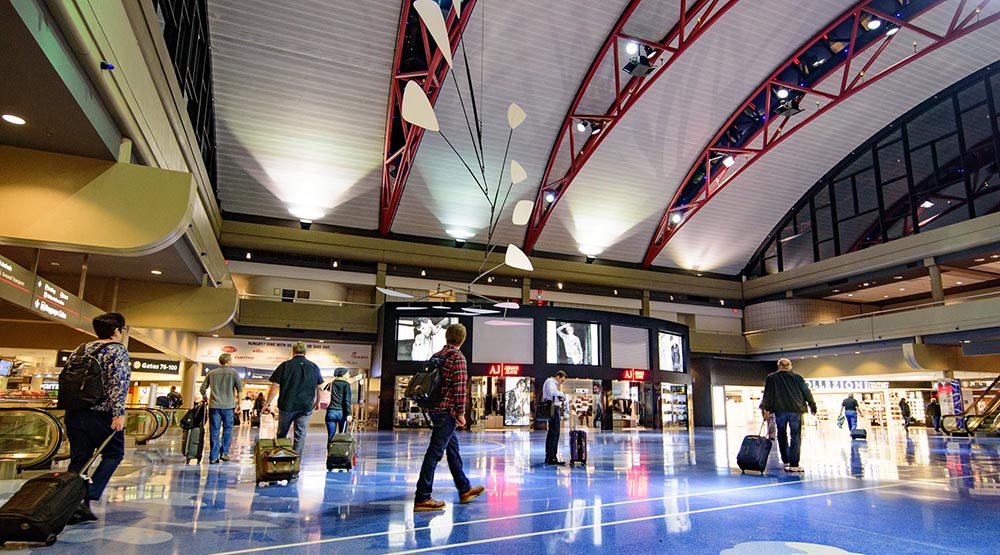 Natural gas development generates millions of dollars in royalties for Pittsburgh International Airport, and now the fossil fuel will also provide power via an innovative microgrid for the 9 million airline passengers a year who travel through Western Pennsylvania.

A microgrid is a self-sustaining electrical distribution system that can connect to multiple, independent power sources and run without support from a traditional utility.

In Pittsburgh’s case, the microgrid will receive power from natural gas-powered electric generators that are capable of producing 20 megawatts of electricity. They’ll be supplemented by roughly 8,000 solar panels spread across eight acres of airport property that can produce up to 2.5 megawatts. The microgrid will remain connected to the traditional electric grid, which will provide backup power when necessary.

The generators will be powered, in part, by natural gas drilled on-site by CNX Resources.

Peoples Natural Gas will build, operate and maintain the microgrid.

A three-hour power outage in June at LAX led to about 50 cancelled flights and numerous flight diversions. In December 2017, a half-day outage in Atlanta’s airport trigged 1,100 flight cancellations, according to CNN.

“Energy is quite literally part of the bedrock of our region,” said Morgan O’Brien, President and CEO of Peoples Natural Gas, which is based on Pittsburgh’s North Shore. “This project illustrates our region’s ability to show the world how to combine innovation and technology to be more responsible to our environment while creating a modern state-of-the-art airport that people will celebrate and that will help power this region’s growth into the future.”

The project is being hailed as a unique example of how numerous private companies can collaborate effectively on a sustainable solution that combines technology, oil and gas industry resources and solar power to serve a key component of public infrastructure.

“Digitization will come faster than most in the industry are prepared for,” says PPG executive

PPG Executive Vice President Tim Knavish offers a mix of caution and optimism about where the coatings industry (and PPG) stand in terms of digitization, in a Q-and-A-style European magazine interview.

Q: Digitization is a huge topic in many industries. How digitized is the coatings industry from your point of view?

Tim Knavish: “On the scale from 1 to 10, ten being the highest, we as an industry are less than a five when it comes to digitization (emphasis added). Maybe a three or a four. Other industries such as retail, transportation, or Amazon are really digitized. We have started to digitize processes and operations on the inside but when it comes to external digitization we still have long way to go. Digitization will come faster than most in the industry are prepared for.”

Then Knavish makes an excellent point about how the coatings industry and PPG should view innovation as a challenge that goes beyond improving just what’s inside a paint can.

“Our industry needs to help improve operations, productivity and sustainability by using less energy and causing less waste…. As a key player in the industry, we must also focus on continuously improving the customer journey and customer experience.  I believe that digital will play a key role in each of these areas.”

Check out the entire interview. And after you’ve done that, read about GrayMatter’s work with PPG: PPG’s Continuous Improvement Unlocks Innovation.

Did you know PPG is among the most prolific patent recipients in the region where it’s headquartered? It is. Plus, PPG has made Fortune’s “Most Admired” companies list 10 years in a row — a distinction based heavily on its commitment to innovation.

Imagine having a helpful, cube-shaped robot that can float around your workplace and inform you about a faulty A/C unit, a leaking water cooler or a failing coffee maker — just by listening to them very closely.

Now, imagine you work in space in the International Space Space, which hurtles around the Earth every 92 minutes at 17,150 mph — and even minor mechanical problems can evolve into major safety concerns.

That’s where Astrobee (the cube-shaped robot developed by NASA and Pittsburgh’s own Astrobotic) and a listening module for Astrobee called SoundSee, developed by Bosch in — again — Pittsburgh, come in really really handy.

As reported by TechCrunch, here’s how the SoundSee module would work in space (it’s still being tested):

“The SoundSee module combines microphones with machine learning to perform analysis of sounds it picks up from the station, which it can use to effectively establish a healthy baseline, and then continually use new audio data to compare in order to get advance notice of potential mechanical issues via changes that could signal problems.”

Dr. Samarjit Das, principal researcher and SoundSee project lead at Bosch Research and Technology Center in Pittsburgh, said SoundSee analyzes “subtle acoustic clues” to determine “whether a machine, or even a single component of a machine, needs to be repaired or replaced.”

If that’s not cutting-edge predictive maintenance, I don’t know what is.

Even though this application is for the space station, the principal of trying to predict when a piece of equipment might fail is based on the practices of Asset Performance Management, which GrayMatter uses to help companies lower operating and equipment costs, reduce downtime and eliminate scrapped product.

“APM involves the development of a comprehensive set of asset strategies designed to ensure assets can meet their intended function.”