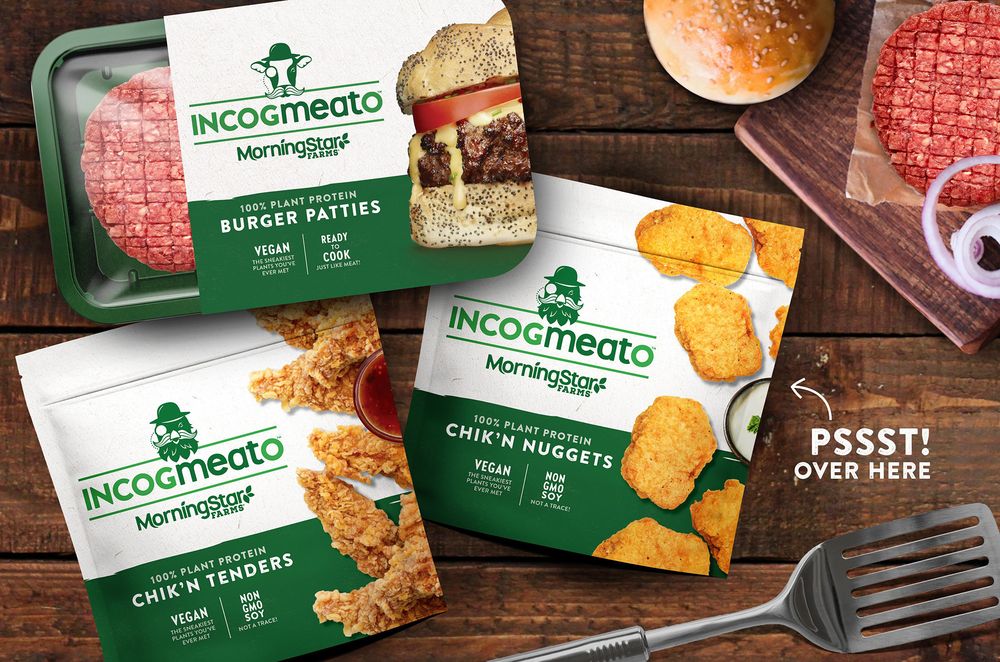 The secret about Incogmeato is out.

Kellogg’s MorningStar Farms will compete alongside real meats in the grocery store, beginning in 20290, with its Incogmeato line, which features clever logos of chickens and cows wearing a false mustache, monocle and bowler hat disguise.

Bloomberg reports that Kellogg will be relying on Incogmeato to help it catch up with companies like Impossible Foods and Beyond Meat who cater to so-called “flexitarians,” people who are trying to reduce their meat consumption.

“The demand for meat substitutes has boomed as consumers see the products as healthier and more environmentally friendly than beef, with Barclays predicting the global market will reach $140 billion globally in the next 10 years,” Bloomberg reports.

“We know the number one barrier to trying plant-based protein is taste. These consumers are still seeking the amazing taste, texture, and sizzling qualities of meat but want a better alternative for themselves and the planet.”

Wired: NotPetya Worst Cyberattack in History — It’s Not Even Close

It’s worth taking some time to read Wired’s 2018 cover story about the “untold history” of the NotPetya cyber attack.

It describes what it was like for IT professionals to experience the first tremors of the attack at the headquarters of shipping conglomerate headquarters of A.P. Møller-Maersk, and puts the cataclysm that unfolded into a global context.

“The result was more than $10 billion in total damages, according to a White House assessment…,” Wired reports.

“To get a sense of the scale of NotPetya’s damage, consider the nightmarish but more typical ransomware attack that paralyzed the city government of Atlanta this past March: It cost up to $10 million, a tenth of a percent of NotPetya’s price. Even WannaCry, the more notorious worm that spread a month before NotPetya in May 2017, is estimated to have cost between $4 billion and $8 billion. Nothing since has come close.”

Wired’s piece is the kind of story that helps non-cybersecurity experts understand how to evaluate the effects of malware on corporations, cities, nonprofits and hospitals.

That probably explains why a story from 2018 about an attack that happened in 2017 is among Wired’s dozen or so most popular stories in late 2019 when so many cities and companies are contending with crippling ransomware attacks.

Read: The Rise of Ransomware: How Water Utilities Can Confront a Growing Cyber Threat

For an in-depth analysis of the cost of cybersecurity attacks, or company data breaches in general, check out the 2019 Cost of Data Breach Report, from IBM, which estimates $8.19 million is the average cost of a breach for a U.S. company.

The New York Times reports the Allen Institute for Artificial Intelligence has developed an AI model that can pass an 8th-grade science test — sort of.

Researchers had to remove questions that included pictures and diagrams because that would have added a tad too much complexity.

Previous test-taking attempts resulted in a score of 60-percent; this time the Allen Institute’s model scored 90 percent on an 8th-grade test and 80 percent on a 12-grade version.

The breakthrough shows that AI models can be trained at an increasingly sophisticated level to deal with logical conundrums that seem relatively simple to humans but are exceedingly difficult for computers to grasp because the questions demand a nuanced interpretation of information they’ve learned or “experienced.”

“This has significant business consequences,” said Oren Etzioni, who oversees the Allen Institute, which was founded by the late Microsoft co-founder Paul Allen. “What I can say — with complete confidence — is you are going to see a whole new generation of products, some from start-ups, some from the big companies.”

Coming up on September 18 and 19, GrayMatter has TWO opportunities to join our experts for an online discussion about how predictive analytics can benefit your company; and a discussion about the next evolution of smart buildings. In our predictive analytics webinar, we’re using the pulp and paper industry as an example, but the themes we’ll discuss apply to many industries.

Check out the links below for more details and to sign up.

• 2 p.m. on Sept. 19: Are you Running a Smart Building or Just a Connecting Building?