In surprise move Thursday, Amazon announced it will not build a headquarters in New York City.

In a statement, Amazon noted that some state and local elected officials opposed the subsidies it was offered in exchange for building a corporate campus and bringing 25,000. The statement highlighted polls that, it said, showed 70 percent of New Yorkers supported it Amazon’s plans.

Amazon said it will proceed with plans to build a corporate campus in Northern Virginia and an operations center in Nashville. 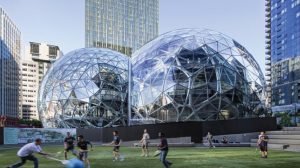 After much thought and deliberation, we’ve decided not to move forward with our plans to build a headquarters for Amazon in Long Island City, Queens. For Amazon, the commitment to build a new headquarters requires positive, collaborative relationships with state and local elected officials who will be supportive over the long-term. While polls show that 70% of New Yorkers support our plans and investment, a number of state and local politicians have made it clear that they oppose our presence and will not work with us to build the type of relationships that are required to go forward with the project we and many others envisioned in Long Island City.

We are disappointed to have reached this conclusion — we love New York, its incomparable dynamism, people, and culture — and particularly the community of Long Island City, where we have gotten to know so many optimistic, forward-leaning community leaders, small business owners, and residents. There are currently over 5,000 Amazon employees in Brooklyn, Manhattan, and Staten Island, and we plan to continue growing these teams.

We are deeply grateful to Governor Cuomo, Mayor de Blasio, and their staffs, who so enthusiastically and graciously invited us to build in New York City and supported us during the process. Governor Cuomo and Mayor de Blasio have worked tirelessly on behalf of New Yorkers to encourage local investment and job creation, and we can’t speak positively enough about all their efforts. The steadfast commitment and dedication that these leaders have demonstrated to the communities they represent inspired us from the very beginning and is one of the big reasons our decision was so difficult.

We do not intend to re-open the HQ2 search at this time. We will proceed as planned in Northern Virginia and Nashville, and we will continue to hire and grow across our 17 corporate offices and tech hubs in the U.S. and Canada.

Thank you again to Governor Cuomo, Mayor de Blasio, and the many other community leaders and residents who welcomed our plans and supported us along the way. We hope to have future chances to collaborate as we continue to build our presence in New York over time.

Chevron CEO: ‘You make your own margin.’

In an interview with Bloomberg, Chevron CEO Mike Wirth says his focus is on the huge potential for Big Oil in the Permian Basin of West Texas.

Keeping costs low in the Permian is essential, he says, so Chevron doesn’t have to bet on oil prices rising and can overcome the high cost of deep water drilling.

“You make your own margin,” Wirth said. “Some of that comes through innovation and cost discipline. That’s a philosophy I bring to my current role and a belief that just because prices go back up, we shouldn’t accept the fact that costs have to go up.”

Wirth is set to explain his strategy to investors in March, according to Bloomberg.

To showcase the smart workbench’s capabilities, Logan set it up to instruct a worker about how to assemble a simple flashlight. In a real-world case, he could easily adapt it to take someone through the steps of assembling, for example, an engine.

The smart workbench also collects data about the timing, error rate and efficiency of the assembly, making it possible to analyze and tweak the process.

“Usually you want to pick parts out of certain bins. The smart workbench will light up the bin and tell you which one to use and it will also ‘yell’ at you if you use the wrong bin,” Logan says. “Everything is run from an app on a computer.”

A line of LEDs illuminates the correct bin. Reaching into the wrong bin triggers a warning alarm and a red light atop the smart workbench.

As a worker moves through steps, he or she scans a barcode linked to a specific component so the system can confirm the correct part is in play. Short instructional videos can also play through the app on the computer screen to show the proper way to assemble parts. When a part is finished, it’s possible to include a quality control check — in this case a light sensor that confirms the flashlight, now equipped with batteries, can emit a beam of light.

“Once we point the flashlight at it, you can hear the noise and it says your flashlight works and you’ve completed the process, and you’re done.”

You can now check out a preview of the emPOWERUP Podcast, GrayMatter’s new industry audio platform.

Regular episodes will debut every other week beginning next week, which will feature an interview with Jim Alampi of Alampi & Associates, a top CEO coach and executive consulting firm. Thanks for listening.

Jeremy is GrayMatter's Brand Manager and the author of TechHub and the emPOWERUP Podcast. He writes about digital solutions, trends and culture in the world of operational technology. Jeremy's background is in daily journalism. He has a passion for storytelling and enjoys highlighting the technologies and professionals taking on complex challenges in manufacturing, energy, cybersecurity and infrastructure. View all posts by Jeremy Boren
We use cookies on our website to give you the most relevant experience by remembering your preferences and repeat visits. By continuing to use the site, you consent to the use of all cookies as well as our privacy policy which you may read and learn about your choices. here.
Cookie settingsOK
Privacy & Cookies Policy

Any cookies that may not be particularly necessary for the website to function and is used specifically to collect user personal data via analytics, ads, other embedded contents are termed as non-necessary cookies. It is mandatory to procure user consent prior to running these cookies on your website.